Group sow housing: No one size fits all 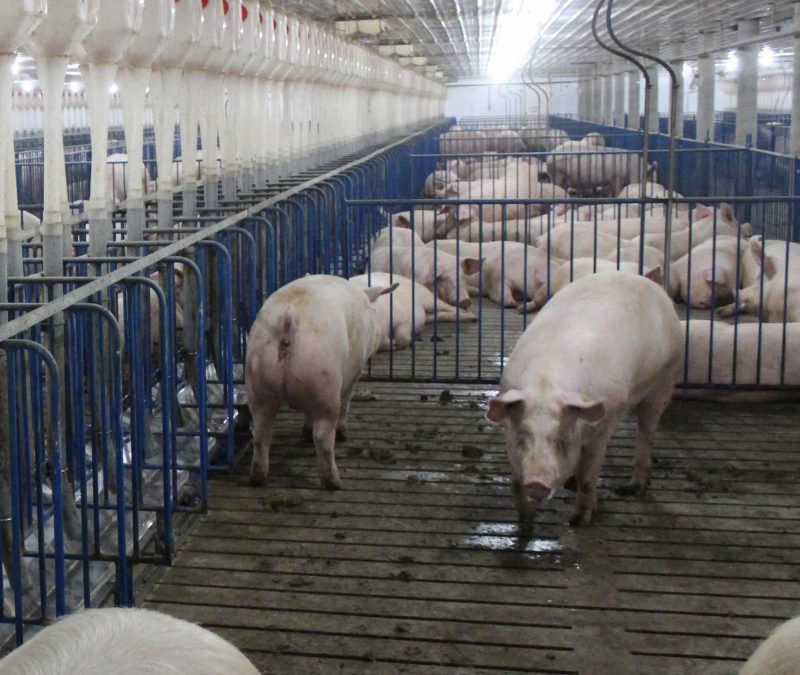 The key is finding what works for you.

Pork producers continuously surpass productivity levels because of years of trial, error and refinement. Management is key and what works for one producer, the pigs, staff or facilities may not work for another. That has long been true and will continue to drive the decision-making process as individuals consider whether to move to group gestation-sow housing.

Currently, 10 states have banned gestation-sow stalls, as have approximately 50 companies across the packer/processor, foodservice, retail and branded-product sectors — all with varying implementation deadlines. Roughly, 50 percent of the U.S. herd is estimated to be housed in some form of group system.

“There seems to be a bit of a regional basis to it,” says Aaron Lower, DVM, Carthage Veterinary Services, Carthage, Illinois. “In the Eastern Corn Belt, we see a lot more group housing. In the Western Corn Belt, there are more options for stalls.”

For folks laying out the capital, a significant consideration is deciding on an asset that will remain viable over the next 20 years.

“Producers are resilient. They can make anything work if they put their mind to it,” says Ken Stalder, Iowa State University swine geneticist. “My biggest concern is whether we’ll be able to give sows the kind of individual attention as we can in stalls. It will take some time for people to learn how to do it differently.”

In the truest form, group housing could include outside lots, hoop structures, open-backed or shoulder stalls (stanchions) or indoor pens with or without partitions. The reality is that the majority of sows will still be housed inside.

The first consideration then is whether to build new or retrofit an existing facility; the second is to determine the penning and feeding system, all while keeping in mind that management and people will drive the outcome.

Costs can range from $500 to more than $1,000 per sow. Retrofitting a facility may be the least-cost option, provided the facility’s structural condition is sound and the flooring, ventilation and manure-management systems can accommodate the new configuration. Retrofitted barns will lose some capacity — about 10 percent, Lower says. But he adds that his clients are taking the opportunity to wean an older pig.

Space per sow ranges from 18 to 24 square feet compared with 14 square feet for traditional stalls. Gilts need a bit less space than sows, and smaller groups need a bit more than larger groups, because it’s harder to get “lost” and escape aggression. The feeding system also influences space requirements, specifically whether you’re going to include some type of stall/stanchion or an electronic sow feeding (ESF) system.

So much of sow management hinges on feeding, maintaining body condition and minimizing stress, all of which can present challenges in group systems. Again, there are several feeding options, including ESF, floor feeding, free-access stalls, trickle feeding or drop feeding with shoulder stalls/stanchions. There are pros and cons to each.

“Part of the decision is which system your managers believe in, not something that’s forced on them,” Lower says. “If they want it to work, it will.”

The two most common options are drop feeding with stalls/stanchions or ESF systems. The former can be used with retrofits or new buildings, whereas ESF is best applied to new buildings. Both can provide some animal separation during feeding, but ESF is the only way to ensure individual, customized feeding.

Because the open stalls/stanchions are more similar to traditional stall-gestation barns, it might ease the transition for workers. Similarly, ESF is a significantly different kind of system and will be a major undertaking for both people and pigs.

“You need the best people in there, someone who is patient and won’t get frustrated,” Stalder says. “Sort of a pig whisperer — it takes a special stockperson to train gilts, because a certain number will just not learn.”

It’s also wise to add an ESF troubleshooter to the staff, someone who is technically savvy and can address equipment issues. “ESF doesn’t just run on its own, and the hog-barn environment is a tough place for technical/electronic equipment,” Stalder notes. But he expects continued improvement as experience reveals what fails and why.

Regardless of the system, it will take a more focused strategy to monitor a sow’s appetite, body condition, skin, soundness and other functions such as respiration, temperature and feces/urine output. For drop-feeding systems, there’s about a 15-minute observation window to identify sick or lame sows, ultrasound, vaccinate and check the feed system, Lower says. “You can work relatively quickly, but you can’t do it with one or two people,” he adds. “The entire team needs to flood the barn; they have to be very intentional.”

ESF presents more of a challenge because individual sows eat at different times, so you’ll have to go into the pen and get them up. “It takes longer to do chores in those barns,” Lower says. “You’ll need more people, and in a tight labor market, that’s a consideration.” He estimates another person for every 2,000 sows. Also, plan on a 6- to 12-month learning curve.

Sow aggression is always a concern in groups, as it can spiral into other well-being and productivity problems. Although aggression often centers around feed, some sows are just bullies. You have to monitor it continuously, not just at initial mixing, because an individual sow can become a target at any point throughout gestation, Stalder notes.

Comparing the Pros and Cons

Regardless of the system, gestation-sow housing should:

Diligent sorting is key. First organize gilt groups, then sort by size/body condition. “If you get them sorted right, they will hold up as a group better than you might expect,” Lower says.

There are two types of groups: static and dynamic. Animals in a static group remain together, so there is one mixing event, which reduces aggression. This works well with smaller groups (80 sows or fewer) and all-in/all-out pig flows.

Dynamic groups are fluid, so there can be repeated mixing events. Research shows more aggression and injuries occur within these groups but no real productivity differences, Stalder points out. Dynamic groups align better with larger animal groups, use space efficiently and require less gating. When using ESF, dynamic groups can optimize the sow-to-feed-station ratio.

The best time to create a group is 24 to 72 hours post-insemination or after pregnancy detection. “Even in farms that mix sows right away, we see pretty good conception rates,” Lower says. “Where we see some drop is during hot weather or if there are additional stressors.”

There are several strategies to minimize aggression at mixing. Stalder recommends feeding sows before mixing and providing ad libitum feed in pens for 2 to 3 days. Lower likes to double-feed sows before leaving the crates and have feed in the pens. After that, Lower’s clients with stanchions feed sows once or twice a day but in a quick session. “We’ve played around with three and four times a day but found that feeding less often lets sows fill up, then they lie down for the day and don’t fight as much,” he notes.

Stalder and Lower agree that it’s imperative to identify at-risk sows early. “You have to be very early in removing those sows in order for them to recover,” Lower says. “They may need to be placed in a smaller, less competitive pen with softer flooring or a stall.” This is especially true for sows in later gestation that aren’t keeping up with the weight gain and body condition of the group.

Another adjustment is how to handle sow records. Individual sow cards can follow them to the pen and be grouped in a container or plastic bag. Some farms use a wipe board for each pen, or electronic identification may be an option. Regardless, finding any specific sow will take more time. “You have to sort through the 20, 40, 80 sows in a pen to find that one,” Lower notes. And, even though ESF provides a “no-eat list” with sow ID numbers for individuals, you still have to go in and find each sow.

A Different Kind of Animal

Group housing requires more selection emphasis on feet, legs and structure. “Some of the little things that you got away with (structurally), you won’t be able to in the future,” Stalder says. Even without group housing, lameness is a leading reason for culling and mortality.

Most group-gestation barns are totally slatted, some so they can be converted to finishing if needed. While that may be a good business decision, it’s not ideal for sows in groups. “A sow for a totally slatted floor in group housing is a very different beast than one in a slatted-stall building,” he adds.

Mortality rates for group-housed sows run about 2 percent higher than in stall farms, Lower says, and young-parity retention (parities 1, 2, 3) will be lower, by 2 percent to 5 percent. “Those are the two areas that we struggle to match sows in crates,” he notes. However, other productivity measures such as total born and pigs weaned match sows in gestation stalls.

Getting and keeping the right people will be just as important as selecting the right pigs. Workers may be more apprehensive in group sow housing because of safety issues and injury risks. Treating and vaccinating animals will be harder tasks. If sow mortality, culling or euthanasia increases, that can be discouraging as well. While training, repetition and patience by management are important, so is hands-on involvement. “You’ll need to be more active, at least for a while. Do chores with them; it’s your opportunity to train them,” Lower says. Spell things out — “Here’s what to look for, what to carry with you, and so on.”

“Broadly speaking, we are at an infancy stage with group housing,” Stalder says. “Producers will learn and adapt, but most people don’t become good overnight.”

It’s never easy to decide whether to change your production system and management, and for many of today’s producers, group gestation-sow housing is unfamiliar territory. Most everyone in pork production agrees that allowing producers to be flexible and utilize practices that work best for them also is best for their pigs. After decades of experience, trial and error, the one thing we know for sure is that there’s no one way to raise hogs.

But whether production changes are driven by your own desire, a need for facility upgrades or marketing factors, there is much to consider before you begin. Your budget, production goals, staffing needs or limitations, whether you will retrofit an existing building or build new are just some of the starting points.

The Farmweld team can help you walk through those decisions and customize projects to fit your needs — no matter the system — whether it involves traditional gestation stalls, gestation stanchions or an electronic sow-feeding system. Group-pen designs and gating needs can be tailored to the layout and stocking density specific to your breeding herd.

The priority is to accommodate your management style and keep the environment safe and secure for both the pigs and people working in the barns for years to come. No one knows what changes may occur in 10 or 20 years, yet anticipating future directions is part of the strategic planning required for your business. From gestation stalls to breeding gating to pen gestation, the Farmweld team understands your long-term investment and the need for equipment longevity. If you have questions about products or need assistance, don’t hesitate to call us at 1-800-EAT-PORK (328-7675) or visit www.farmweld.com.