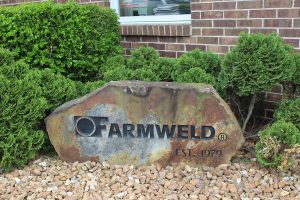 Farmweld’s story began in 1979 when Teutopolis, IL native Frank Brummer started business as a welder. During the early years, Brummer repaired many different brands of feeders for local farmers and noticed many design features he would change. At the encouragement of his farmer clients, who were wary of the poorly-designed feeder models then available, Brummer began working on his ideas and was soon building “Farmweld” feeders. Perhaps his most important move was listening very carefully to what farmers had to say. Brummer learned a lot about their operations, their goals, and what they needed from equipment. He also studied the animals closely and read the latest animal behavior research from major agricultural universities.

By the early 1990s, swine producers throughout the United States had taken notice of Farmweld products for their durability and performance results. Beyond feeders, Farmweld’s product line had expanded to flooring, gating, gestation, and farrowing equipment and drinkers. Robotic welding and 24-hour manufacturing were incorporated in 1994. When the late 1990s brought the US swine industry serious economic challenges, Farmweld remained strong due to its commitment to quality products and the company’s ability to handle all types of facility projects, small or large.

Farmweld soon started exporting products to multiple countries where pig farmers were seeking products with longevity made of quality materials. International tours started coming through the office and manufacturing facilities in Teutopolis, IL.

Entering the 21st century, Farmweld personnel kept advancing their skills and honing in their products to stay on the leading edge. They ventured into automatic sorting technology. However, with success in that venue, the company was being pulled in two directions. Farmweld leadership elected to return to their roots and study innovations they could create with non-automated feeders. Thus, the R adjust™ System was born to allow precise feed adjustments for wean-to-finish and nursery feeders. The R adjust is a set-it and forget-it technology using a combination of tension, friction, and leverage for concise, worry-free control over feed dispersion.

Farmweld’s story continues due to seeking innovations, quality testing, and listening to feedback to ensure that our products make raising hogs easier, more efficient, and sustainable for producers today and tomorrow.