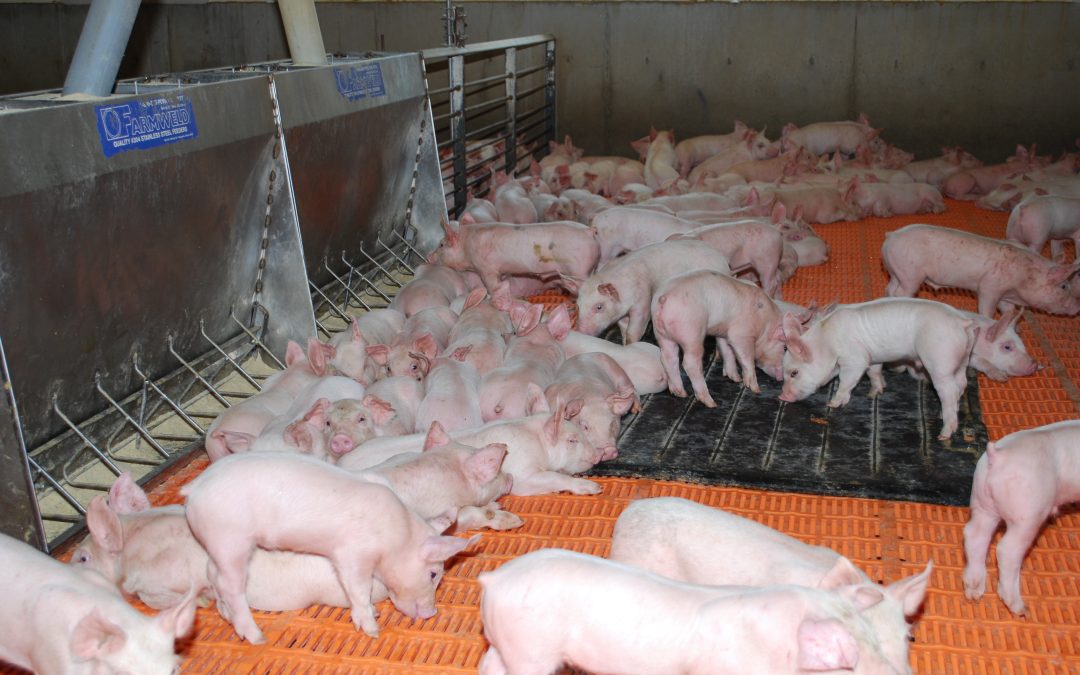 Pigs face continuous adjustments in their first 8 weeks, but meeting thermal needs is a good start for long-term success.

Birth, weaning, transport and placement are all stressful events that can impact the piglets’ survival, vigor and performance. Getting piglets from the sow to the nursery is a multi-layered process, where one action feeds into the next and everything has to work together.

“We need to think of it as a whole system and how the pieces fit together,” says Suzanne Leonard, assistant professor and Extension specialist, North Carolina State University. “There are a lot of things that we can’t control, but we typically can control the environment and meet the pigs’ thermal needs. Then we can check that box to give us a solid start.”

Researchers from four universities combined their efforts to review the scientific literature on the environmental needs and related management during the piglets’ first 8 weeks and how it impacts productivity and survivability. More specifically, they zeroed in on thermal stress during pre-weaning, transport and post-weaning. Piglets work to maintain a near-constant body temperature, the researchers point out. But because young pigs are nearly hairless, lack fat insulation and have a high body-surface-to-volume ratio, they are susceptible to heat loss and chilling.

“Doing everything you can early on to keep uniformity high and all of the pigs eating and gaining, the better production outcomes you’ll get,” Leonard points out.

Birth, thermal and environmental changes, competition for colostrum and social hierarchy are all stressors facing newborn pigs. The first 12 hours of life are critical, with the first 2 hours essential to avoiding hypothermia. The piglet experiences a significant temperature drop when it moves from inside the sow at 101.8° F to an air temperature around 72.5° F, and it’s the first time the piglet has had to regulate its own body temperature.

“Piglets are not prepared for that, especially if they’re wet. A wet piglet that’s not in a heated microclimate can begin to experience hypothermia very quickly, especially for a lightweight pig,” Leonard says. Low birthweight (less than 3.3 pounds) is the dominant risk factor for mortality, and the highest mortality occurs in the first 3 days of life.

A 2020 study showed that drying piglets with a cellulose-based desiccant was more effective at preventing rectal temperature drop than drying with paper towels, but either option was better than nothing. Placing newborn pigs in a warming box for 30 minutes after birth was better than no intervention but was most effective when combined with drying.

“The main thing is to get piglets dry and warm. Proper care in the first 3 days will set them up for success,” Leonard says. “A dry, draft-free environment with a microclimate that’s set up and operating properly is critical to ensure that every pig gets off to a good start.”

Because piglets need an air temperature around 95° F and sows prefer 65° F, the compromise is to set the room near 73° F and provide a microclimate for the piglets to access. The configuration (open, or fully or partially closed) and placement are a producer’s preference, although studies show piglets prefer an area toward the rear of the stall.

Heat-source choices for microclimates are radiative (heat lamps or plates), conductive (heated mats) or a combination. “We’ve seen that you can get the same mortality and productivity outcomes if you use a heat lamp or heat mat in an open or enclosed space,” Leonard says. “The heat mats and some newer enclosures are more energy efficient than a traditional heat lamp.”

Studies have shown that piglets prefer heat lamps for the first few days, but by 3 days of age, they prefer to sleep in dark areas, so mats could be advantageous.

Piglets will tolerate temperatures ranging from 86° F to 112.1° F, though newborn piglets prefer 92° F to 98° F. The optimum temperature decreases as the piglets grow. Note that due to the shape and configuration of the heating element, temperatures throughout the heat mat or lamp area may not be uniform. Programmable thermostats for heat mats and enclosed microclimates, as well as adjustable-height heat lamps, help meet the growing piglets’ changing thermal needs.

A hand-held infrared thermometer costing $40 to $50 is a useful tool to periodically check the mats, lamps and microclimate environment. “It’s a great way to be sure you’re hitting your mark,” Leonard says. “And take a look at the piglets — what they’re doing, how they’re behaving. If you see a small pig in an unheated area of the stall, it’s important to put it back in the heated microclimate.”

Keep the microclimates in place for at least 2 weeks during warm months and through to weaning during cold seasons. While it can be easy enough to set up the microclimates, it’s the days after farrowing when things can get overlooked. “The farrowing process is very intensive, and we focus on the sows and newborns — but we also need to follow up and check that the piglets’ environment is still right as they grow,” Leonard says.

The end goal is further down the road. “The real success in pre-weaning is when those pigs reach market weight,” she notes.

Adding to the already stressful weaning period is the need to transport piglets from the farrowing barn to the nursery or wean-to-finish site, and those conditions influence the pigs’ ability to recover and grow. Mixing litters, overcrowding, noise/vibrations, and hot and cold temperatures are all transport stressors, but distance is the biggest factor, and in most cases, it’s out of a producer’s control.

The greatest mortality rates have been associated with both warm (greater than 77° F) and cold (less than 59° F) ambient temperatures during transport.

“For the pigs coming in, you don’t control the distance, the weather or the trailer design,” says Brett Ramirez, assistant professor in agricultural and biosystems engineering, Iowa State University. “What can be controlled is to open or close the boarding on the trailer for ventilation and temperature control, as well as bedding, stocking density and cleanliness.”

Stocking density does influence mortality rates, but exactly why is less certain. For example, a 2017 study didn’t find a relationship between stocking density and compartment temperature. Instead, the researchers noted that perhaps social stress or the pigs’ inability to settle comfortably, causing fatigue and lesions, plays a role.

The inability to control many transport factors is all the more reason to ensure that the receiving facility is ready — preheated and dry during cool periods with accessible waterers and feed in every pen.

Weaned pigs continue to face a multitude of stressors: transitioning from milk to a grain-based diet, social stress of being removed from the sow, transport, new environment/facility and establishing a new hierarchy.

“It’s important to get those first 3 to 5 days right,” Ramirez says. “The three things you have to consider and check are air temperature, airspeed at the inlets and flooring conditions.” Some of those details will be influenced by weaning age and whether pigs are placed in a nursery or wean-to-finish barn.

Although the weaned pig has gained some body fat and improved its ability to thermoregulate, it’s still only about 13 pounds to 15 pounds and is transitioning its diet. At placement, feed intake is challenged for 4 to 7 days, disrupting energy intake and the pig’s ability to produce heat.

That’s why pre-heating the facility is critical, especially during cool months. “Start at least a day in advance of the pigs arriving,” Ramirez says. “Get it warmed up to the 70s° F for some time, and once you know when pigs will arrive, ramp it up to the 80s° F or the preferred room temperature.”

There are so many factors that go into selecting a starting temperature, he points out. Research shows that the lower critical temperature for the first week of placement is around 85° F; by the second week it can move closer to 75° F, followed by a weekly reduction of 2° F to 3° F until it reaches typical finishing conditions.

“A wean-to-finish building should run a bit warmer than a nursery,” Ramirez says, “and setting up some sort of microclimate with brooders will help offset the high-temperature need and prevent the environment from pulling heat from the pigs.”

Brooders need to be set at the right height so that you can check how the pigs are lying as well as the mat temperature and adjust it as needed. It also has to provide enough space to fit all of the pigs, at least early on. Depending on the season and outdoor temperatures, brooders will be in use for a couple of weeks or as many as 8 weeks.

Flooring also influences the pig’s thermal environment, and materials vary widely. Metal conducts heat the fastest, and bedded floors are the warmest although less practical. Slatted concrete, solid concrete, plastic and coated metal round out the prospects. Air temperatures will need to balance the conductive heat loss from flooring materials.

“In a wean-to-finish barn with concrete slats, you need to put down rubber mats or degradable/disposable ones,” Ramirez says. “You’ll need something to help block drafts coming off the headspace and provide some insulation between the pig and the concrete.”

During the first week post-weaning, pigs struggle to meet nutritional requirements and recover from negative energy imbalance. But airspeed also can influence performance. “You want fresh air and a quality air supply but not so much movement that you’re giving them a draft,” Leonard notes.

A hand-held anemometer, such as a Kestral, can help you check inlet airspeeds and relative humidity. “Airspeed at the inlets should be about 600 feet per minute at minimum ventilation, so that it’s throwing the air out and not dropping on the pigs,” Ramirez says. “And make sure that the building is tight; air coming through cracks, joints and seams can create microdrafts for the pigs.”

Relative humidity can impact pig health and the pig’s ability to cope in warm temperatures. For example, research shows for finishing pigs encountering 50 percent relative humidity, a temperature gain from 71.6° F to 82° F caused a 25 percent decline in growth rate. “Barns are warm, and they can get humid when ventilation rates are reduced to save on propane,” Ramirez says. “But people are paying more attention to it; I’ve seen more humidity sensors placed in rooms in the last 5 years than ever before.”

Although feeding systems are not really part of environmental considerations — whether it’s mat feeding, gruel feeding, trough feeding or something else — weaned pigs need good access to feed and water right off the truck.

As a take-home message, Ramirez advises producers to check weaned pigs two to three times a day for at least the first 3 days after placement. “It does take more management during that first week versus later on,” he notes.

“The key is to give the pig a warm, dry and draft-free environment all along the way; you hit those three and you’re good to go.”