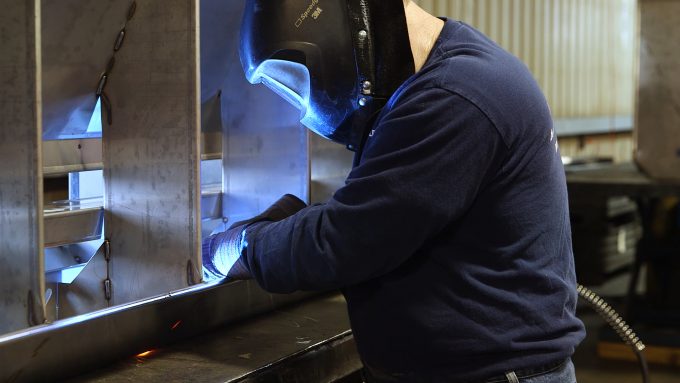 People remain key to manufacturing livestock equipment, but in the 40 years since Frank Brummer started his Teutopolis-based company, technology has grown.

Technology also brought changes to the pork industry served by Farmweld. The last couple of years, farmers and the manufacturing company together weathered tariff impacts and market uncertainty.

Tariffs on Chinese products caused increases in raw material prices, raising the product cost for the end consumer. But trade woes made the biggest impact on “our ability to sell pork,” Brummer said. Still, the pain wasn’t as bad as when the Chinese stopped buying pork, he added, estimating his business probably dropped 50%.

“We strongly support open trade – farmers and manufacturers,” Brummer said. “We want to compete on a level playing field.”

Trade uncertainty caused market disruptions among the U.S., Canada and Mexico. The three countries recently signed the United States-Mexico-Canada Agreement. While exports to Canada and Mexico are not a big part of Farmweld’s business, the company’s fortunes are closely tied to its customers. “We’re linked. If they’re not successful, we’re not successful,” Brummer said.

Aaron Niebrugge, Farmweld sales manager, continued, “Our business is based more on confidence of the industry. In 2014 when PED (porcine epidemic diarrhea) hit, the confidence was down.”

The livestock industry future looks promising. Niebrugge pointed to younger generations who are returning to the family farm. Raising livestock provides them that opportunity. “To bring everybody back, you have to diversify,” he noted.

Workforce remains a key issue for Brummer, especially with expanding technology in manufacturing. The company’s Effingham County location proves no hinderance to find employees with the skills needed, according to Brummer. “The quality of the workforce is tremendous. The work ethic is good,” he said.

Niebrugge agreed: “Our workforce is very loyal. We are very fortunate we have this workforce. A lot of them have farm backgrounds and the skills that could be shifted to different parts of the company. … A lot of the industry is very competitive.”

However, attracting future employees and retaining good ones are “near and dear to my heart,” Brummer said. He admitted sometimes the issue keeps him up at night. “It’s going to get 10 times as hard – not just for my plant for the industry,” he added. “It takes a lot to attract the brightest and best. It’s the biggest challenge going forward.”

Brummer, a farmer’s son who started as a welder, described adjustments his company made to retain employees, some who’ve been with the company for 25 years. Flexibility and attention to employees’ needs are key, according to Brummer. Millennial employees have different workplace standards and are motivated by different factors compared to baby boomers, he noted.

Young employees seek quality of life attributes, such as parks, bike trails and recreation centers. “It has to be a place they want to live. They have no fear of moving elsewhere and finding a job,” Brummer said.

“We don’t have enough welders. We mostly train them,” Brummer continued. “There aren’t going to be enough farm boys and farm girls to take those jobs.” To interest potential employees, he contacts local high schools and colleges.

Attracting young employees who are motivated “to make a difference” may be puzzling, Brummer said, adding, “There are no people I’d rather work with. They’re so darn bright. They look at things differently.”

Asked how communities and educators can support businesses such as his, Brummer replied, “Educate us on how to be better employers … effective ways to attract them and how to retain them. We don’t have a problem, but we don’t want to. The challenge for all companies, small and large, is the labor crisis.

“I don’t have the answer,” Brummer said, “but I’m really trying to figure that out.”